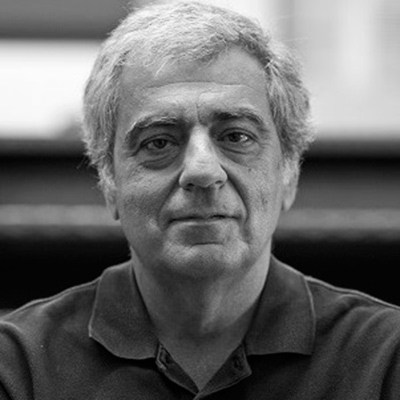 Miltos Frangopoulos (born Athens, 1951) is a British-educated art historian currently Deputy Director of Studies at the Vakalo Art & Design College, Athens, and Visiting Fellow in Art History at the University of Derby, UK, active in diverse fields including art and design education, art history, visual perception theory, semiotics, translation and literature. Author of An Introduction to the History and Theory of Graphic Design (2006), and The Translator’s Workshop (2004), a collection of essays on literary translation, has also published two novels (The Stone, 1986; Port Bou, 1996) and a chronicle based on family archives (Perfer et Obdura, 2013). Has written extensively on art, literature, cultural issues and semiotics in journals and collective volumes. Published translations include, inter alia, Swift’s Gulliver’s Travels, Coetzee’s Waiting for the Barbarians, Blake’s Visions of the Daughters of Albion, Khlebnikov’s Zaum-Futurist Manifestos, and Norberg-Schulz’s Genius Loci, For a Phenomenology in Architecture, Voltaire’s Poème su le désastre de Lisbonne. Has also translated texts on psychoanalysis from the French, and language-edited the Greek version of the Vocabulaire de Psychanalyse by Laplanche and Pontalis. Has sat on the boards of the Greek Art Critics Association (AICA Hellas) and the translation journal Metafrassi.