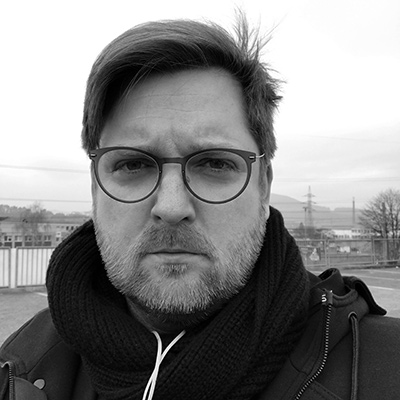 Born in Northern Slovakia, Zilina. Studied at Academy of Fine Arts and Design in Bratislava and and after finishing his doctoral studies started to work there. Now he is assoc. professor at Department of Visual Communication and Head of Department of Visual Communication. From 2002 he is simultaneously graphic design in freelance and in 2011 he founded dr.bencik studio. Between 2003 and 2007 he was designer of famous Slovak cultural centre Stanica Zilina-Zariecie. In his design practice he is focused on visual identity, book design and mainly graphic design applied in architecture, art expositions and public spaces. He is cooperating or work on projects for cultural institutions in Slovakia (Slovak National Gallery Bratislava (SNG), Slovak National Theater Bratislava (SND), East Slovak Gallery Kosice (VSG), Art Museum Zilina (PGU), City Theater Zilina (MDZ) and many other art institutions and individual artists (Daniel Fischer, Palo Macho, Frantisek Burian, Miro Svolik, Robert Brun, Rastislav Sedlacik, Katarina Poliacikova, Monika Pascoe Mikyskova and many others). His work was awarded with several main Slovak prizes: Architecture prizes of Dusan Jurkovic; CE.ZA.AR and “arch” magazine prizes, all for large cultural project of revitalization kasarne/kulturpark in Kosice, Slovakia (in cooperation with architecture studio zerozero). He also get National prize for communication experimental design for public project Balustrada Zilina, Slovakia (in cooperation with architecture studio 2021) and several times the national prize The most beautiful book of Slovakia. In years 2005 to 2011 he organized graphic designers conference Kupe. He is active in writing, curatoring and researching in graphic design. Acadamicaly and profesionally active also in Poland (in cooperation with K. Schinwelska worked on projects for Gallery Kordegarda Warsaw, National Centre of Culture, Warszaw; Casimir Pulaski Museum Warka; Pismo Teatr, Warsaw; Stefan Zeromski Theater Kielce; Slendzinskich Art Gallery, Bialystok). Lives and Works in Bratislava.